The first part of the Theft incident is captured here, which details about the theft of two wheeler’s battery.

How the LPG gas cylinder was stolen:

To summarize the incident, we are tenants in second floor of a good independent house. In the ground floor, there are cages given to every tenant. These are beneath the stair case, opposite to two small flats and near parking lot of ground floor. Every cage has the room for two LPG gas cylinders which can be locked through an external lock. Gas is supplied from the cage with the designated points to the kitchen of respective house via internal pipeline. We stay on 2nd floor and had put out cylinders to get more space in our kitchen.

Everything was fine until the unfortunate day, at first we noticed our bike’s battery to be stolen and later in the day, my parents realized that even the cylinder’s location was vulnerable. To their dismay they observed that the lock was broken and one of the spare cylinders was also stolen ! There was regulator connected to the main cylinder which was hard to remove,given the space available under the staircase. Probably that’s why the thieves left the main cylinder and took away only the second one, unless there was any humanity angle.

We wondered why only our assets were targeted because there were 4 more cylinder cages beside our’s. Although we were emotional, later got the thieves reasoning. Honda Shine’s battery placement by design is very easy to be taken out while compared to other bikes. With respect to the cylinder, our’s was the most fragile lock amongst others and the culprit’s eye for detail astonished us ! My parents checked with the tenants in the ground floor, if they had heard any sounds but their answer was negative. We were surprised that if the thieves knew so much about the place, they would also know that the families in ground floor can spoil their plans. We were also scared for a while at the guts of these thieves.

I got a call in the evening from my father that they are in the Police Station. I was worried and later got relieved a bit on knowing that its about the stolen cylinder. He wanted me to directly reach the Madivala Police Station from office. When I did, I’ve observed my house owner, his son and a neighbor. The reason why the latter was pulled in was because the request for FIR has to be written in local Kannada language. Even our house owner wasn’t very fluent with Kannada so he requested the neighbor, who agreed to accompany.

It was the first time I ever entered into a Police Station. I found it to be very different from how its stereotyped in movies. I couldn’t dare ask the Inspectors around if we could write the request in English, as there were hand cuffs and probably a cell close by 🙂 There were no signs of they taking up thorough investigation as it seemed to a pretty commonly reported incident. However in order to get a new cylinder this FIR is a must. So we had to go through this process. I couldn’t follow the local language conversation between Police, house owner and our neighbor but the gist I could get it is, they are getting many such requests and would send some one shortly to inspect the area and investigate further. The only hope we had was in case the thieves are caught in some other cases, there’s a remote possibility of recovery. We also narrated the battery theft case and interestingly this has brought down the seriousness of our report, as it seems to be the work of a petty thief.

The trio discussed to come up with the best first draft in Kannada. I signed it and we handed it over to the Inspector. He suggested few corrections and the third attempt was agreed by them. Later in the night I got an SMS that the FIR is in progress. After few days, I got a message with the FIR id and few more details. I informed my house owner and he himself collected a copy of it from the Police Station. 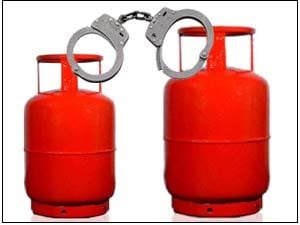 So our first step was done and meanwhile my father inquired Gajanana Indane Gas Enterprises, Koramangala which is one of the very well maintained gas agencies. They had briefed him about the process and my father was surprised that theft was a pretty common thing that the agency folks also experience from customers. Just out of curiosity, I wanted to consult them to understand if there’s any way to track the cylinder as it would have some sequence id or unique number and who ever exchanges the stolen cylinder can be back tracked and possibly catch the thief. However pretty soon I’ve realized that:

1. Unique id tracking like IMEI for Mobile is possible but I don’t see it being recorded anywhere.
2. For the value of the cylinder, the efforts put in would be higher. So neither Police nor the agency folks may invest that much time as there are bigger things to worry about.

I gave up the idea of doing self investigation as well and then got clarity that if I myself is not bothered beyond a point, why should the Police or Agency take it up.

We completed the process at the Agency and had to pay around Rs 3000 for the new cylinder and it was given immediately. After few months I got a message that the FIR got closed and when I checked the status it was not very clear but turned out that no proper evidence was found or something. Police had not visited our place but it seems to be a housekeeping exercise to close pending items after some time.

After few weeks we got to know that in the neighborhood lane also had experienced similar incident. They had CCTV setup working and it showed two guys entering and walking away with stolen cylinder in a calm and composed way on their bike. As the quality of the images was not great, more details were not possible. Our house also had the CCTV points but the owner had parked the installation for future.

We had requested house owner to deploy security guard as the thieves in the locality were targeting houses with less protection. As an immediate measure we moved our cylinders to our kitchen and not using the cage any more. The other’s continued with their ones and no such issue has been repeated again.

1 thought on “What to do when your LPG gas cylinder is stolen ?”